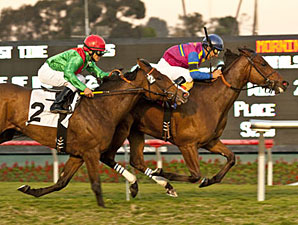 Not this year anyway but it’s an interesting race as it’s the last Grade I for fillies over a mile before the end of the year (I think)!!!  Also interesting at this time of the year is the three year old fillies are maturing fast and the result showed in the first two finishers being three year olds.

Summer Soiree ran her usual ‘catch me if you can’ race and only just got caught before the wire by a filly she’s beaten before (this will be an interesting match up next year too).  Unbridled Humor was so unlucky to be inched out for third place and Gypsy’s Warning was just a length behind her.

I didn’t realize how nervous I get before a big race until I noticed when I was being spoken to I was giving one syllable answers and hoped they’d go away!{jcomments on}