Formerly the Lane’s End Stakes (and I can’t get used to using the new name)!  Both Crimson China in the race before (Rushaway Stakes) and Animal Kingdom in the Spiral came from last place to finish like trains!  Unfortunately, it looked as if Crimson China did not like the kickback at Turfway Park and he had about 15 lengths to make up but he finished second which was incredible, considering.  Animal Kingdom also found himself at the back of the pack, checked into the turn but still went on to win convincingly.  Congratulations to Team Valor International for both runs.  The win puts Animal Kingdom into the Kentucky Derby but the connections will discuss this as he has never run on dirt and seems to prefer synthetic or turf, BUT kickback like they have at Turfway is like dirt!!  Watch this space….. 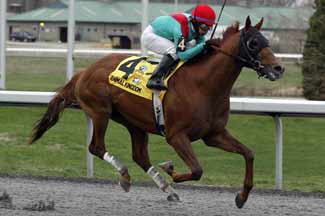 That belief paid off as Garcia deftly found racing room to improve position in the backstretch and far turn before launching a five-wide move entering the homestretch. Animal Kingdom, making his fourth career start, looked like a horse racingveteran as he charged past Decisive Moment in midstretch, surging to a 2¾-length win.

“I decided to be patient and save ground,” Garcia said. “My horse responded very well today. I stayed on the rail because I had a feeling everybody would try to go wide. I figured that if he was good enough, he would make a move and he did.”

While Team Valor International’s homebred had not faced stakes competition before, trainer Graham Motion saw a lot of promise in the three-year-old Leroidesanimaux (Brz) colt in his seasonal debut, a fast-closing, narrow runner-up finish in an optional claiming race on the Gulfstream Park turf. Motion noted that the Gulfstream course typically favors speed and closing efforts catch his attention.

On Saturday, Motion thought Animal Kingdom may have overcome a bit of a speed bias in the Spiral, Turfway’s top Kentucky Derby Presented by Yum! Brands (G1) prep race.

“I think it was a very impressive race today,” Motion said. “Today you can’t afford to get too far out of it. …That makes his race all that more impressive. We knew there would be an honest pace.”

Team Valor’s Barry Irwin believes Animal Kingdom, who is Triple Crown nominated, has classic potential. He said they will work him on dirt a few times before making a decision on any of the classics.

Prior to the Spiral, Swift Warrior led at every call and held off a late charge from Team Valor’s Crimson China to post a two-length victory in the $100,000 Rushaway Stakes, a 1 1/16-mile race for three-year-olds.{jcomments on}