Water Cube was a flashy grey/roan who got looks wherever he went, not least as he was owned while in training with us, by Olympic swimmer Michael Phelps.  People were fascinated with the connection.  We always laughed when he went for water therapy at the Fair Hill Equine Therapy Center, that he hated the water and there was nothing they could do to change his mind!

He retired to Phillip Dutton to be made into a three day eventer.  One of his students Whitney Shapiro fell in love with him, bought him and took him back to Washington State with her.    She adored him but unfortunately they were not able to fulfil their ambitions and dreams together.

This was when he first went to Phillip Dutton in 2016. 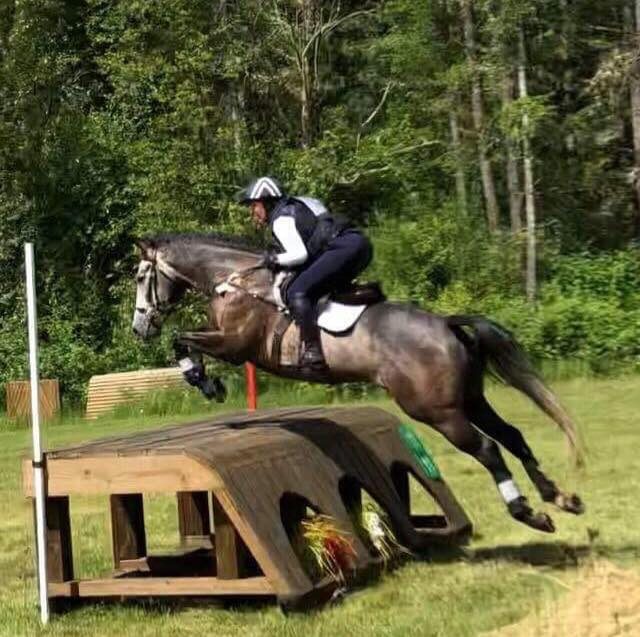 At least 30 vehicles, and possibly as many as 50, including a horse trailer hauling three horses, were involved in crashes that happened about 2:30 p.m. Saturday, when CHP officers responded to a series of traffic collisions on the southbound side of Interstate 5 south of the Grapevine, CA.

A prize-winning horse, Water Cube, once owned by Olympic swimmer Michael Phelps, was killed in the crash. He was affectionately referred to by his handlers as Cubey.  Initial accounts of the traffic collision reported that Water Cube had been rescued and placed in the care of a veterinarian. The horse, described as 7 years old, died of the injuries.  Spicher and other handlers of the three horses held high hopes they would clinch future competitions.  In March 2016, an article in USA Today reported a prize-winning equestrian saying that although Water Cube was too young to be in the Olympics, he could see the horse competing in the world of eventing, in which horses compete in dressage, cross country and show jumping.