What can we say about Logan!  For as long as we knew him he was always quirky and he was with us from 2011 to earlier this year!   He was one of those horses who you either had a soft spot for or really didn’t want to be around!  He RNA’d in the 2010 yearling sale so his owner Jack Swain, III decided to keep and run him.  He was a very consistent runner who was very rarely out of the frame but eventually he decided he’d had enough.    Codie Mott worked at Brookdale Farm in Lexington where Jack keeps his broodmares and where Logan went for a break.  She fell in love with him and asked that when he was retired that she could have him to see how he liked another type of life.  Apparently he loves it! 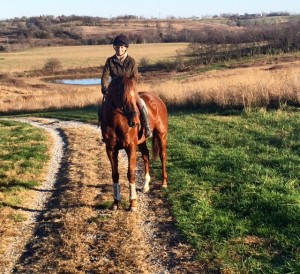