We recently heard from Kanagaro’s new owner and he has the best home!  Not many people would take on a horse who needed this much rehab time.

“I adopted Roo in February 2017 and he immediately went into a rehab program for a severely bowed tendon. My vet classified it as a grade four tear of the superficial flexor tendon in his right front. When we looked at the ultrasound she was using terms like “shot gun blast” and “swiss cheese.”

We are currently 7 months into a 12-16 month rehab program and he is doing fantastic! I’m not sure there are even words to describe how well he’s progressing. We recently were cleared to ride, and are up to 20 minutes of walking and trotting on the long sides of the ring. Slow and steady keeps the tendon healthy!

Roo has a “cheeky” personality. He’s very curious and wants to be involved in everything. He tries very hard to please, learns really quickly, and he’s got an opinion about absolutely everything! I’m convinced that he’ll put up a “protest” just to see if I’m paying attention. I usually just roll my eyes and keep going. He recently discovered that tiny humans are actually Pez dispensers for horses. (See attached)

Thank you again for being so concerned about him and once his muscles are built back and he’s put on more weight, I’ll share an “after” picture. 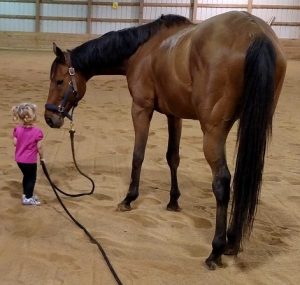 I put this on Facebook last week, but I can’t quite contain myself with how well Roo has been doing.

My best friend’s son has some issues and equine therapy was one of the recommendations. He’s been resistant to therapy, so my trainer who happens to work in the program he would be going to, came out to teach a “lesson.” We wanted to see how Jack would respond. He loves horses and always liked coming to see my old horse. He had never met Roo before. We wanted to introduce him to lessons rather than inform him he was going to another therapy.

The video is very short, but Roo was an absolute saint for the entire lesson. He and Jack did very well, and he was perfect. I love this horse more and more every day. I am so proud of him and how far he’s come.

Over the holiday break, I got the best news! Roo has officially been cleared to go back to full work. I am so excited! It was a long rehab process, (11 months), but his tendon is fully healed and the ultrasound looks great. We now start the next stage of getting him back into shape.

Of course the same week, he gets cleared to work, we get hit with the insanely cold weather making riding impossible. We’ve had daily highs in the negative numbers for over a week. I was able to turn him out in the indoor and let him run a bit, which he did, once. The rest of the time he just followed me around begging for treats.

Here is a photo of his two favorite treat dispensers, Ellie & Aliza.

I hope all is well with both of you.  Roo and I are doing well and spring is finally here.

I guess is technically spring, but the weather here begs to differ.

We had a bit of a set-back in Roo’s work due to some issues with him being extremely body sore.  My trainer and I are took a conservative approach and he’s finally turned the corner and we’re making better progress.

It took over a year, but I finally got the rescue he came from to complete the “retired from racing” process and send me the papers.  Not that he will ever be sold again, but I wanted to follow through with that process.

He’s definitely loving retirement because getting him to move forward proves to be a bit of a challenge sometimes, but his brakes are spot on!

The next task will be working with Roo on trailering.  He’s been all over the place so trailers shouldn’t be a problem, but apparently, he thinks all trailers eat bay thoroughbreds.