Tell The Truth was never going to be a superstar, although he won his second start, so rather than putting him through the claiming ranks the owners decided they would find him a nice home so he could be young enough to start another career.  Mary Motion, Graham’s niece always had her eye on him so quickly took them up on the offer.  Below is her story…

“I first met Tell the Truth (Fluffy) in 2016 when he was a 2-year-old. I was very lucky to be able to ride him out every morning through most of his racing career as a 2-year-old for Graham. He had 5 starts including a win at Delaware Park. He then went on to run in the Grade 2 With Anticipation Stakes at Saratoga, finishing 6th. He ran two more times after that, but showed very little interest in racing. I knew from riding him in the mornings just how cool of a horse he is, so when the opportunity came up to retrain him when he was only just turning 3, I didn’t hesitate to speak up for this little guy!

The first few months he spent some time at my dad’s Old Chapel Farm in Virginia learning how to be a horse again and living outside with a group of foxhunters. In May 2017 I decided it was time for him to move back up to Fair Hill close to me so I could start the retraining process. A month later he was already competing in his first local horse show and winning lots of ribbons.

It’s been just over a year since Fluffy officially started his new career and he has been very successful! We compete mainly in a local hunter show series, some jumper shows, and the Fair Hill Thoroughbred Show. He has earned many championships and when he’s not showing he enjoys messing around on the farm or going for fun trail rides. I am so lucky to have this horse in my life. He is only 4, but he has accomplished so much already. I can’t wait to see what the future holds for Fluffy!”

Below is a video and photos of ‘Fluffy’ and as you can see the transition from racehorse to show horse was not a problem, look at all those ribbons! 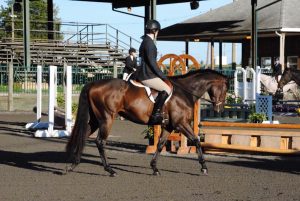 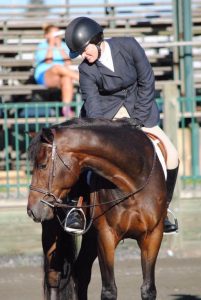